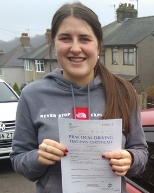 "As my daughter Hannah fast approached 17 I rang Phil to arrange driving lessons as he had been highly recommended to us by a couple of people whose sons he had taught previously ... and boy were they right! I cannot recommend Phil enough .
He truly has been amazing from start to finish .
Initially he came to our house for an informal chat / meeting and went through how he works and what he does .... ( gosh how things have changed since I learnt to drive !)
He was very friendly and approachable and there was no pressure or hard sell to use him but both Hannah and I knew straight away that he was going to be the one for the job !
He has kept to his word and has done an amazing job with Hannah, he was always on time and turned up with a welcoming smile on his face and always made Hannah feel relaxed and at ease with her driving and his lessons were fun too ... I could see Hannah’s confidence growing week by week and what I had initially thought was going to be a nerve racking parental experience turned out to be the complete opposite . Hannah always looked forward to her lessons and came back ‘buzzing’ afterwards .
During the latter stages of her lessons Phil asked Hannah what she wanted to work on / improve on and he has always been professional throughout ...
After each lesson Hannah received an email report of ‘ what went well and things to work on and think about for next lesson ‘ which as a parent was great to receive and something I never expected initially ... also the reports weren’t just a two line note they were very in depth and detailed and showed that Phil really knew Hannah well and her driving capabilities ...
Hannah really enjoyed her time with Phil and they even went for coffee and cake to discuss her theory test .
Phil has 100% delivered a fantastic service and I would highly recommend him to anyone ...
But that’s not the end for us as a family in requiring Phil’s services as I have 3 boys too that I will be using Phil for in

Pass 1st time! Quality driving lessons to get you on the road.